skip to main | skip to sidebar

TAKE A GUESS WHERE ELDER MAURER'S FIRST AREA IS??

CASPER WYOMING!!
I got a call from an Elder in Rapid City, South Dakota today asking for Elder Maurer's mom...hmmm that would be me! Talk about make your heart drop! It seems that Keegan took his Visa debit card with him that had expired, who knows where the real one is, so he had no way to pay for his bike. So mom comes to the rescue again!
After quizzing the salesperson at the bike shop which is located in Rapid City and the Elder calling for Keegan as he wasn't allowed to get on the phone with me (RATS) I finally got the Elder to slip up that the new debit card needed to be sent to the mission home not to Casper...HEH HEH
Elder Maurer did say in the background to tell my mom I have sent her my new address! Ahhhhhh
All letters, parcels, packages need to be sent through the Mission home address they told me when I called to ask about Keegan's debit card. The address is listed before but I will list it here again.
GO ELDER MAURER!

I LOVE TO SEE THE TEMPLE...

Keegan and I decided we would see a new temple every week from the time he was endowed until the time he went on his mission. I cannot recommend this enough if possible for anyone who is going on a mission or for any parents who are having their children get ready for a mission and are about to be endowed. This gave Keegan and I a unique opportunity to learn together and it was such a spiritual experience for us both!

Keegan got to go to the Open House for the new Draper Utah Temple before he went through for his own endowment. It was a "meant to be" moment. 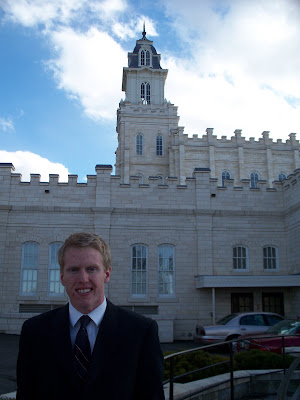 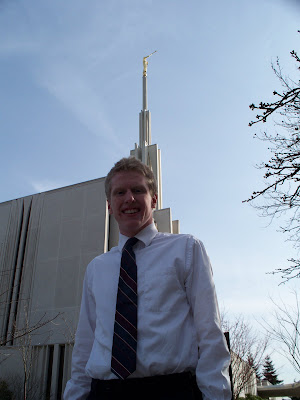 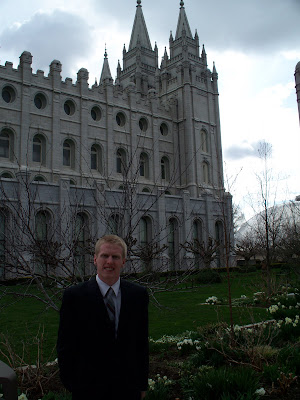 BE SURE AND SEE SOME NEW PICTURES THAT WERE ADDED TO OLD POSTS, I FIGURED OUT HOW TO ADD THEM ALL BY MYSELF...NOT BAD FOR AN OLD GAL!
I have just learned how to put pictures on the blog and finally can take over for Brianna. Her and I will be doing it together.

The only kissing he can do is with his mom! 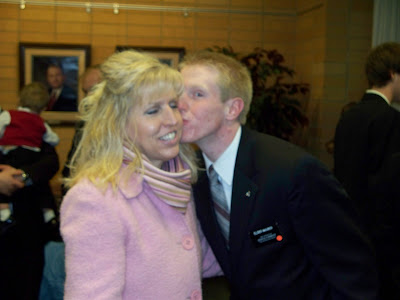 His Sissy-Brianna, ahhh the love of a devoted sister! 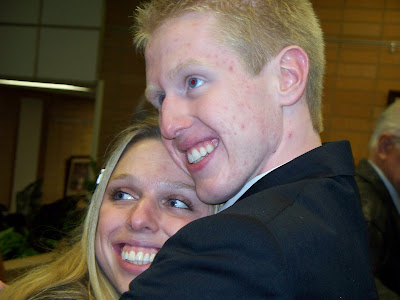 Bonding time with the three women in his life...Sissy, Mom and Keegan's girlfriend Kristen 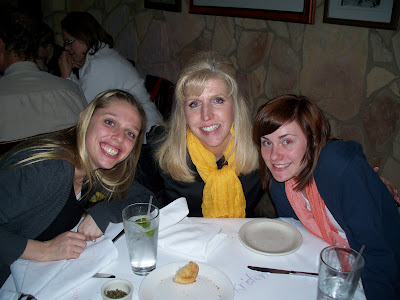 Just the three of us at "Color Me Mine" trying to not miss our Keegan so much! 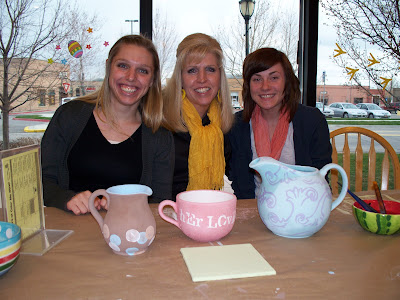 Posted by Rapid City Here We Come at 9:36 PM No comments:

Ted and I thought it would be fun to give Keegan a last "farewell" message so we bought a bunch of plastic cups to stick in the fence on the overpass above the freeway...well maybe we should have measured first because we got too big of cups. After our second attempt we got the right size cups and had the message almost completely finished when what do we behold but "BUSTED BY THE POLICE!" Yep we had to take the sign down while the Lehi Police Officer waited in his car with the lights flashing ever so brightly.

The sign was supposed to say "WE LOVE (HEART) U KEEGAN"! 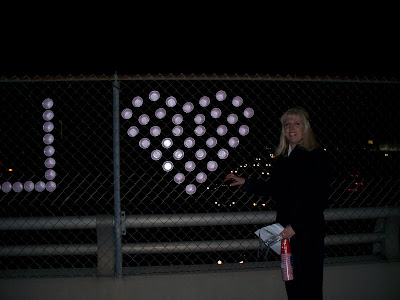 This is the back of the sign, the front is over the freeway in bold red color! 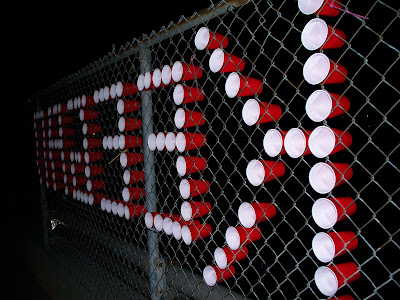 Yes that is a police car in the background...BUSTED!!!! 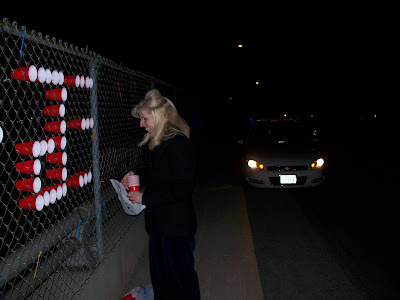 Our second attempt was to make a sign out of a shower curtain since it was Sunday and we didn't want to "break the Sabbath." We used some super bright pink paint and hung it over the Pleasant Grove overpass, unfortunately Keegan missed it. But when I got to talk to him Monday morning via the payphone at the airport he got a chuckle out of the story. He told me to send pictures of that! 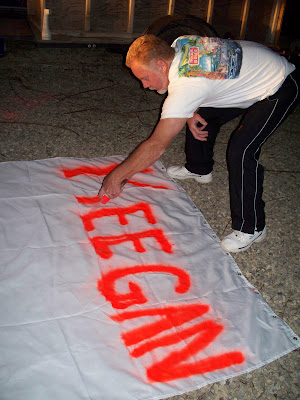 Mom helping with the second try... 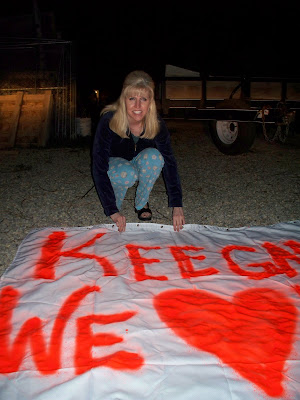 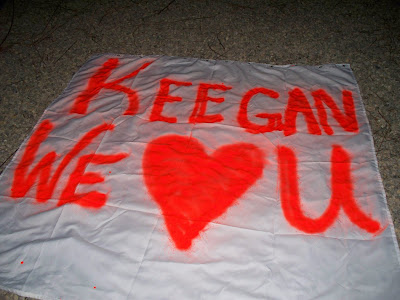 Keegan left on Monday morning, April 13th to fly to the South Dakota, Rapid City Mission. He got to call me the morning of and talk to his "MOM"! He had to throw the homemade jam away at the airport (a gift for his mission president and his wife) because we forgot it is considered a "liquid." He improvised by buying Utah jam and honey at the gift shop in the airport.

He was a bit upset because Elder Sequin's family came to the airport to see him off. On the back of the card they gave to us in the MTC they told us no visiting or phone calls including the airport...so he was frustrated but handled it ever so politely.

He had a Sister missionary that told him he had 5 minutes while she was tapping her watch because they could be proselyting while at the airport. I told him to put her on the phone with me and I would let her know that he was doing exactly what he needed to be doing and that was saying goodbye to his mother! We got a good laugh out of that.

He can't tell us enough how much he loves us and how much he appreciates all that was done for him to get on his mission, ahhhh now we are sooooo reaping the rewards!
Posted by Rapid City Here We Come at 9:07 PM No comments:

If you want to write Keegan before his new address is posted here is the mission home address where mail will be forwarded to him:

Keegan leaves the MTC on Monday morning and heads for Rapid City, South Dakota to meet with President & Sister Cannon, his mission president and wife. He will be flying out of Salt Lake City, Utah with two Elders and two Sister missionaries. The two Elder missionaries were his roommates while he was in the MTC and the four of them were in his district.
Keegan has sent pictures of his companion, district and of his branch. He also has sent pictures of other missionaries that he has made friends with while at the MTC. He has written every week and has done quite well while at the MTC, working hard and growing spiritually in leaps and bounds.
On Friday, April 10, Keegan got to make a phone call to his mom! Yes you read this right, he got to phone home! It was so much fun takling to him after a few weeks of no phone contact. He will get to call again on Mother's Day and Christmas but besides that all contact will be made with the United States Post Office or if lucky through a weekly email.
We will be loading pictures of the MTC after we get a scanner so stay tuned!
Posted by Rapid City Here We Come at 6:17 PM No comments:

MY LAST WEEKEND IN THE MTC...COUNTDOWN! 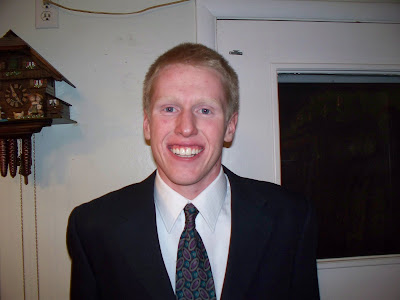 Keegan is on his last weekend in the MTC. He leaves Monday, April 13 for Rapid City, South Dakota. He will meet with President and Sister Cannon first and then be sent to his first area. Four of the missionaries in his district (two Elders that are his roommates and two Sister missionaries) are flying out with him. Keegan is their district leader in the MTC. This will be at least a bit reassuring for him as he won't be going alone or without knowing someone.

Keegan has sent home lots of pictures already. He is working hard and is loving being in the MTC. The homesickness has ebbed and so now he is just interested in learning the work. He can't wait to get out into the mission field and share the gospel with them. 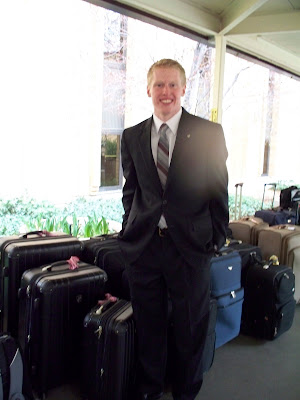 Keegan tells us he loves to get letters often! He says he doesn't get so homesick if he is hearing from people. He doesn't have much time to write but he loves getting letters. He says he can never get enough mail. 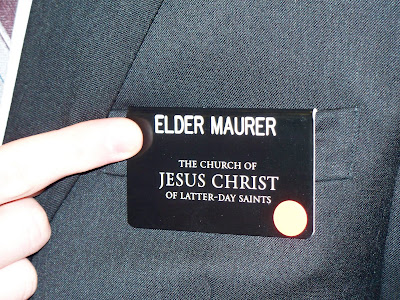 We will be posting his new address as soon as we get it.
Posted by Rapid City Here We Come at 7:28 PM No comments: